Escape to the dream world of Palazzo, where the tradition meets the new, where baroque is replaced by the modern minimalism. In the traditional side streets of the old Nafplion, Palazzo excites you! The luxury, the quality and the affordable prices make it ideal for your short or long vacations.

Pension «il Palazzo» is the ideal choice if you are looking to stay in the center of the Old town of Nafplio in a traditional building. It is harmonically built and it offers comfortable rooms, with lots of light and color.

With a surface of 20square meters, room 1 is decorated with earthy colors and it offers anatomic bed, spacious bathroom, flat screen, nice decoration and a large window that lets the light come in. The wooden floor and the ceiling give a touch of cozy and traditional hospitality. In this room you will also find, air condition, mini bar and hair dryer.

A spacious room of 25 square meters, decorated with red and white colors that will impress you. King size bed and luxurious furniture, large windows and spacious bathroom. Enjoy your drink in an air-conditioned room that also offers a flat screen and a hair dryer.

Sensual colors in harmony with the qualitative furniture, in a room of 25 square meters. The king size bed and the nice modern decoration warranty relaxing moments, while the jacuzzi will offer you moments of euphoria and relief. It offers mini-bar, flat screen, air conditioning and hair dryer.

A high quality suite of 45 square meters. The elegant decoration and the comfortable living room compose a unique blend in a room where the dark colors and the nice furniture preponderate. Experience unforgettable moments during your stay in Nafplio. In this suite, you will also find bathroom with jacuzzi, mini bar, flat screen and five large windows, in order to enjoy the amazing view to the town.

A room of 25 square meters, decorated with cozy, earthy colors. The wooden floor and the elegant furniture are inspired by the tradition of the area. You will enjoy the jacuzzi in the bathroom, as well as the amazing view to the old town and the sea from the balcony. It also offers mini bar, flat screen, air conditioning and hair dryer.

A suite of 45 square meters, designed in a way that will amaze you. The elegant, king size bed and the sophisticated living room match the desk. The wooden floor and the white ceiling are an especial match, while there is a stair that leads to the private terrace. This suite is fully equipped with mini bar, flat screen, air-condition, hair dryer and jacuzzi.

ACTIVITIES IN THE AREA

A historical town, like Nafplio, has a lot of sights that are worth a visit. There are literally infinite choices, the one better than the other. Every visitor will be satisfied, that's for sure.

The Venetian fortress, known as Bourtzi, is considered as the trademark of the town. It was built by the Venetians in 1417 and its first name was Castello dello Soglio. It consists of a tall octagonal tower and it is surrounded by semicircular towers. The entrance of the bay used to close with a movable chain, so " Porto Gardena ", the port of the chain, was a safe place.

Nowadays, visitors can reach it with a boat from the port of Nafplion and watch many events that are organized during summer.

Between the sights of Nafplion, the well known castle of Palamidi distinguishes, an imposing Venetian fortress, built in 18th century. The steep homonymous hill was fortified by the Venetians after a battle with the Turks, during the war between them in 1687. The fortress was impregnable and consisted of eight bastions. 857 stairs connect it with Nafplio.

Inside the homonyous bastion on the top of the fortress, there is still the chapel of Apostolos Andreas, since the era of the Venetians. Near the chapel there is the bastion “Miltiadis”, where the hero of the Greek revolution, Theodoros Kookotronis was locked up.

You can access the fortress through the road or by the 857 stairs. By reaching it, the scenery reminds you another era, until you reach the highest spot, where you can enjoy an amazing view to the town and the area.

The rocky peninsula Akronafplia was the old acropolis of Nafplio. The Turks used to call it Its-Kale, which means internal castle. It is an oblong peninsula that penetrates the Argolikos bay and connects to the coast in its east side, the pass of Arvanitia. Akronafplia consists of three levels, each one of them was a castle. The fortification of Akronafplia was extended during the possession of the town from the Romans, the Franks, the Venetians and the Turks. During the era of Kapodistrias, there were built a church and a military hospital and the fortification and the armature were fixed. After 1821, it was used as a camp and as a jail.

The Bavarian Lion
An impressive monument, that was carved in a rock in 1936 by the German sculptor Siggel. The lion has its eyes closed in an expression of sadness, like a human. 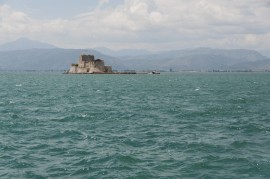 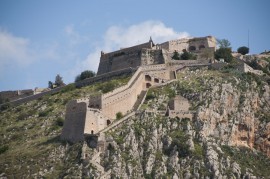 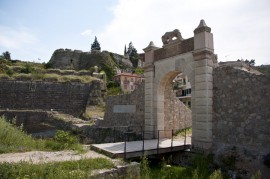 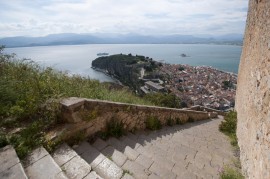 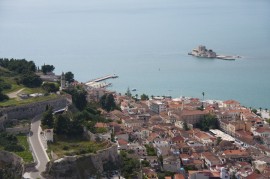 Newer comments have been added
You must login to comment