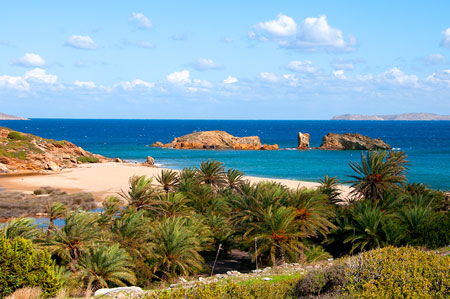 Vai, is situated in the northeastern part of Crete about 7 kilometers from Palaikastro. It is the largest (250 hectares) oasis of palm trees in Europe, with incomparably beautiful lush greenery, thousands of palms, ending up to a pristine golden beach. Itanos had been one of the most important coastal cities of eastern Crete from the Minoan years until the first Christian era. Nowadays it is known under the name of Erimopolis. Its citizens were dominating throughout the coast of Sitia, from the Samonion cape (today cape Sidero (iron)) to the Erythreon cape (what is today called Goudoura) and the island of Lefki (Koufonisi). Toplou is a famous monastery in the eastern part of Crete, located 10km east of Sitia and 6 km north of Palaikastro. At "Hiona" beach, about 2km away from the village has been discovered an important Minoan city and rare finds with most importand a gold and ivory statuette 50cm high, that is displayed in the Archaeological Museum of Sitia. The Folklore Museum of Palaikastro is lodge in a rebuilt traditional Cretan house. It is exhibited tools and objects characteristic of local agrarian life. For someone who desires to meet a population and live the experience of its culture, the present is not enough. A wild beauty canyon situated 5km away from Palaikastro with about 2,5-3 km length. 20 kilometers away from Palaikastro on a road passing through the small villages at the sides of the mountain is Zakros. Zakros is a lush village with fresh water springs and tall sycamore trees.

Palaikastro : Hotels in the area

..to ANATOLI rooms for rent in Agathias, Palekastro, Sitia region, East Crete… Accommodation and holidays in the most traditional region of Crete..