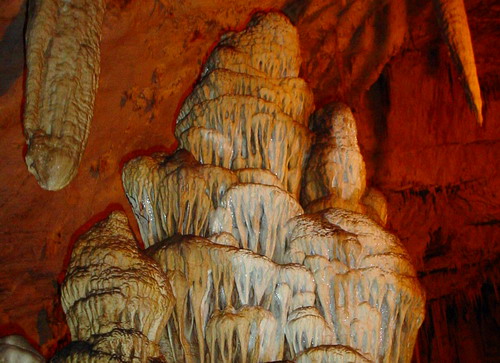 The Antiparos Cave is unique, not just for its stalactite formations but for its close links to the island's history.

Ancient vessels found inside were dedicated to the goddess Artemis and, according to one epigraph, the lyric poet Archilochus of Paros was among its earliest visitors. The names of Macedonian generals conspiring against Alexander the Great were found inscribed in the cave, where they hid to escape Alexander. Another notable visitor was the Marquis de Nointel, the French ambassador to Constantinople, who spent Christmas Day 1673 in the cave. Many visitors, from the Marquis de Chambert in 1775 to King Othon (Otto), Greece's first king, in 1840 carved their name on the walls. During the second world war, the cave suffered extensive damage by the Nazi occupiers.

The cave can be reached by car or municipal bus. The church of Ai Yannis Spiliotis stands at its entrance.

Antiparos : Hotels in the area

"Sunday Hotel" is a top destination in Antiparos and combines the elegance and comfort you desire. It is located in Chora of Antiparos with panoramic view of the port of the island.

Antiparos, a jewel in the center of the Aegean next to Paros island. Every step will lead you to sandy beaches and crystal clear waters.

Antiparos, with its calm rhythm, the easy access by fast boats and its small size, provides the perfect environment for ideal holidays.

The Dolphin Hotel at the village of St. Georgio Antiparos is a sheltered traditional sea-front settlement on the island of Antiparos.

Hotel MANTALENA awaits you for unforgettable holidays in the heart of the Aegean, in the beautiful and picturesque island of Antiparos.