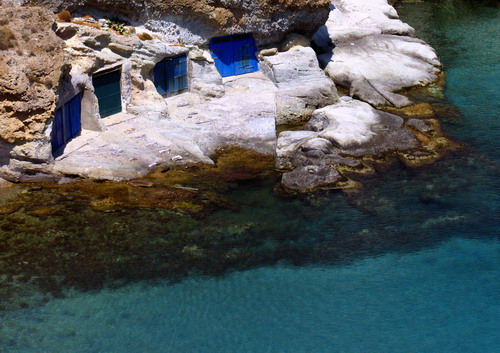 According to mythology, the island was named by its first inhabitant, Kimolos. To the Venetians, the island was known as Argentiera, mostly likely from its silver-hued soil, while in medieval times it was known as Echinousa, that is, isle of the echidnae.Now submerged, the ancient city was on the island's west at the present-day site of Hellenika. On the seabed near Ayios Andreas islet, off the coast at Hellenika, there are visible ruins of houses and graves. Roman and Byzantine pots found at the site suggest the ancient city was inhabited through Byzantine times.Like the rest of the Cyclades, Kimolos was pillaged by pirates and fell under successive rulers. Yet at times it flourished.  In 1207, the Venetian ruler Marco Sanudo united it with the Duchy of Naxos; later it came under Turkish rule and, following the Russo-Turkish war (1770-1774), it passed into Russian hands.Kimolos gained independence from the Ottoman empire in 1828, when it joined the Modern Greek State.

Kimolos : Hotels in the area

Welcome to Kimolo, into a truly beautiful and special place that helps you let yourself to dream...