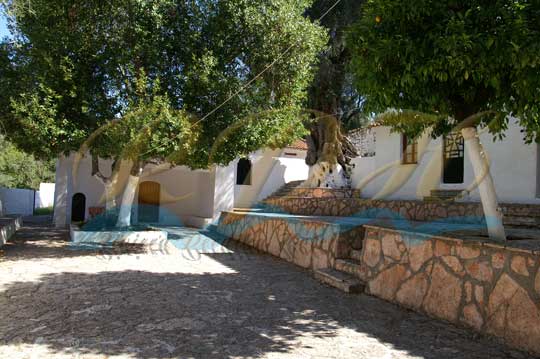 It is a fortified coastal settlement, built on a limestone slope ending up in the Ionian sea on the south end of Karavostasi beach west of Perdika village. It has been identified with ancient Elina as it is mentioned on a leaden inscription from Dodoni. The name is a derivative of national “Elini” known from Stefanos Byzantios of a Thesprotian tribe who lived in Margaritio Dimokastro area. The settlement that extends over 22 ha and the perimeter of its wall reaches 3.404 m covers the highest (226m) eastern top of the hill up to the sea having maximum axis of 1.000 m and average width of 200m. Its population reached 6000 inhabitants in its heyday. The walls constructed in the first part of 4th century B.C. surrounding a smooth surface on top of the hill are1.600m long, 3.5m thick and are boosted by rectangular towers. One might observe carvings on the rock bed used as building foundation, as well as, supporting walls, ruins, tunnels, water wells etc. The 1.400 m long west wall was annexed during the Hellenistic period, surrounding also the small port where part of the wall together with its towers is still preserved in good condition. Due to the steep ground inclination there are some counterbrace walls that create levels and traces of ancient buildings on top of them. After an extensive fire a small rescue excavation took place in 1938 in a burial tomb on the east of the settlement. The recent clean up revealed the fortification walls not only on top of the hill but in the beach as well.

Perdika : Hotels in the area

"Where nature meets your expectations ...”

Hotel Arilla To a small village at an altitude of just 500 metres from a beautiful beach.