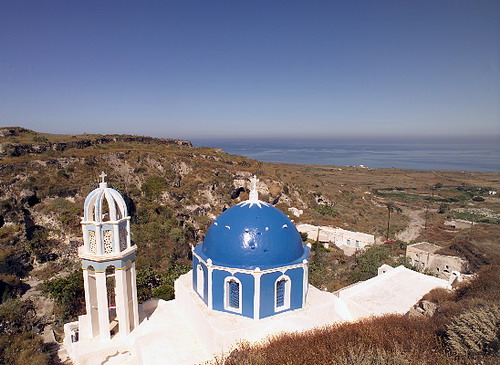 Thirasia is a small piece of the western coast of the ancient island of Strongili, which had been cut off after the devastating earthquake in 1500 BC. Today you can make yourself an idea of the former round form of the island by uniting Thirasia, Santorini and Aspronisi imaginally. By chance it was ground that the beautiful daughter of King Thira Thirasia was hiding for thousands of years remnants of an ancient culture after the huge destruction of the volcano in 1500 BC. In the middle of the 18th century pumice stone was mined on a large scale from the quarry of the family Nikolaos Spiridonas Alafouzos in Thirasia, which was used for the construction of the Suez Canal. The workers in the quarry found remains of a building, of earthwaren vessels and even of a human skeleton. These findings were the reason why excavations were started in Akrotiri and in other places of Santorini.