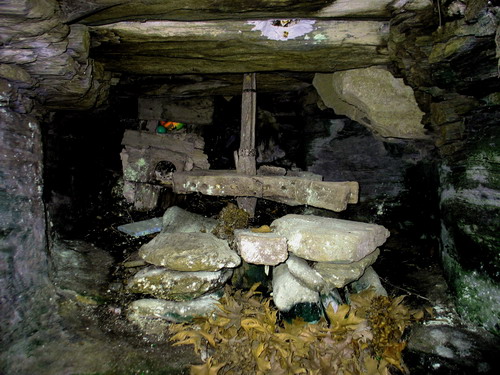 Ayios Petros Tower at Ano Ayios Petros. Cylindrical tower, built from slate. The tower sits on a 9.40-meter diameter base and extends to 20 meters. It's believed to date from the fourth or third centuries B.C. or even the Mycenaean period.Makrotantalos Tower. The structure is also sometimes referred to as the Castle of Ostodosia. It's a typical example of Venetian defensive architecture on the island. The tower is located at the rocky end of Pyrgos beach on the northern tip of the island's western coast. Vryokastro at Varidi. Sections of the island's fortifications are preserved here. The walls protected inhabitants from raids. Kastellaki at Gides. Small fortifications opposite the Kalokairini settlement.   Fryktoria in the Ayia Marina area at Makrotantalos. Tower used to relay messages across the Aegean; only a section of its base is preserved.

Byzantine - era Monastery of Sotiros in the Vitali district

Archaeological Museum of Palaiopolis: the museum has interesting finds from sites around the island.  Ancient Zagora. The ancient settlement of Zagora is located on a remote mountain plain, about 160 meters above sea level, on the Zagora peninsula. Ypsili Archaeological Site (also known as Aprovatou). Excavations have unearthed ruins of an ancient settlement and a fortified acropolis with an Archaic temple.Apoikia and the Sariza mineral springs.

Andros : Hotels in the area

Built on the beautiful beach of Agios Petros on Andros, the housing complex Aethra, it is certain that it can provide a true oasis to anyone who wants to rest,

By the clear beach of Agios Petros you will find a family type touristic unit of spacious furnished rooms-apartments, surrounded by a green garden.

The apartment complex Rastoni is situated in the traditional settlement Anemomiloi in Chora, Andros

In a 2-hour-journey away from Raphina, VILLA-KOULA is waiting for you, for your escapes.

Villa Korthi is a Bed & Breakfast complex located just 20 steps from the sandy beach. It is Ideally located

Studios Marfo are located in the scenic Batsi of Andros Island, in the region of Stivari. Stivari is a natural