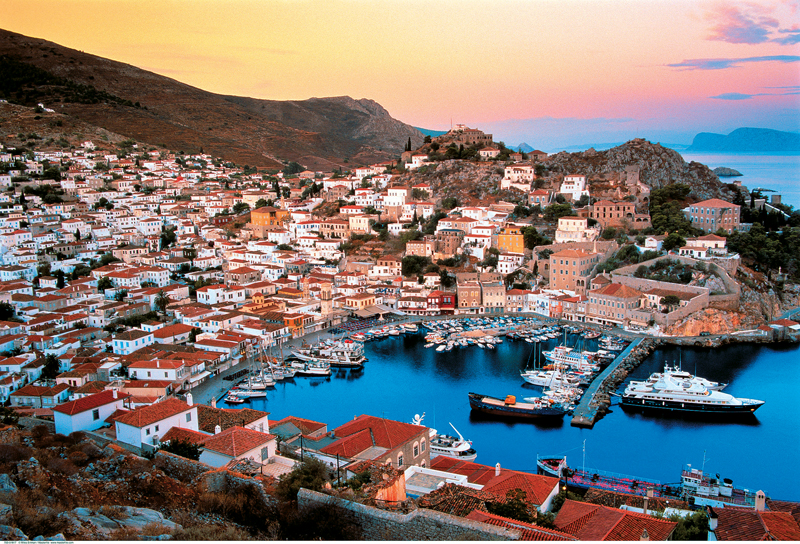 The beautiful roads and alleys, paved with slabs and the houses, adorned with flowers, give to the island of Hydra a touch of magic and a romantic mood.  Its worth visiting the Manors of the Island and watch the harbour from down the hill.
Also, to admire the sunset from "Periptero" and "Spilia" and to visit the 6 Monasteries and the 300 churches of Hydra.Especially, you have to visit : The twin Monasteries of Saint Eupraxia and Prophet Elias, where in 1825 were imprisoned some of the heroes of Greek Revolution, amongst them and Kolokotronis.
The Monastery of Saint Trinity, The Monasteryof Saint Matrona, The Monastery of Saint Nikolaos. The Monastery of Virgin Mary of Zoubra, and the Church of dormition, with the Byzantine and Ecclesiastic Museum.Also, you have to visit the Churches of Hypapante and St. John the abstinent, with the wonderful wall paintings of the 18th century,theMuseum of History, which runs daily and has got importand relics, archives and also a library. A very nice sight is the Bastions with cannons, that protected the city to the left and to the right of the harbour.Finally, you should visit the Manor of Lazaros Kountoyriotis, which it accommodates a division of the National Historic Museum, the Manor of G. Kountouriotis.

Hydra : Hotels in the area

With the utmost regard towards its guests, the FOURSEASONSHYDRA

Leto Hotel on Hydra island is discreetly located in one of the island’s most picturesque alleys, Leto Hydra Hotel is distinguished for the 4 star services it provides its guests, in combination to the beauty that surrounds it and the authentic architectural style along the strict guidelines of the island.

SUNSET STUDIO is only (6) six minutes away on foot from the port of Hydra and is a studio, part of a traditional stone-built house

The Hotel Miranda originally a wealthy sea captain's mansion was built in 1810.

In a distance very near from the harbor of Hydra (only 30 meters) traditional guest house PortaDelMare has opened its doors to welcome you.