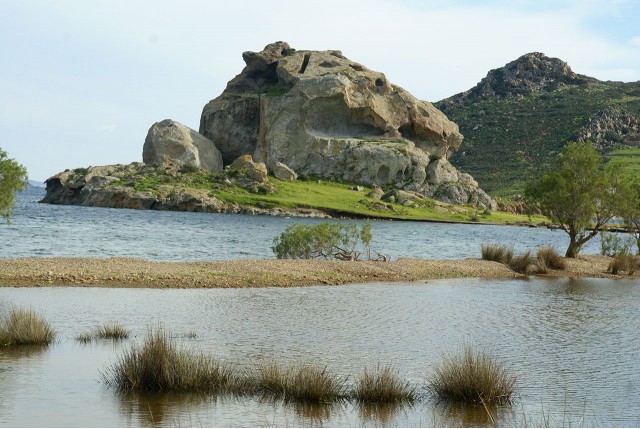 Patmos is one of the islands of the Dodecanese, 158  nautical miles from the harbour of Piraeus.It is just 34 square km, and the length of its coastline 71 km. According to the latest census 3.047 people reside on the island .Plains and hills dominatethe island'sviews with a beautiful lace like coastline and crystal clear blue water.

The climate is mainly dry, with preponderantNorthern winds, a mild winter and gentle summer breezes. The trees and the little vegetation that you find at the South part of the island emanate from former reforestations.The grounds morphology consists of high hills that switch to lower levels. The land is rocky, volcanic and steep and its highest point is Prophet Ilias (270 meters) which is located in the centre of the island, south of Chora.There are two more hills, one at the northern part called “Sklaves”, and the other at the southern part called “Prasovouno”.

Patmos is called "Theovadistos" according to the Orthodox faith, and it is a place with unique aura, that has fanatic friends. It has a perfect transport network connecting the island with all the settlements with the main beaches. It also has an appreciable 30klm mapped path network. You can go around the island by bus, taxi, local boats and picturesque paths.

Patmos : Hotels in the area

Byzance Hotel is a two building complex, build in traditional style and it is located in Skala Patmos. The hotel has 25 rooms, apartments and studios

ALL STUDIOS IRENE located in the beautiful and quiet area of Skala Patmos neti pot. Situated just 100 meters from the sea

Hotel Rodon is located only one street away from the harbour front in Skala,

Our friendly, family hotel is in the picturesque port town of Skala, close to all amenities and on the main road from Skala to St. John’s Monastery

In the wonderful bay of Diakoftis, on the southwest side of Patmos, you can find Alykes Studios.

Just a few meters from the port, on the paved road leading to Chora, KALDERIMI emerges as a picture.

The Delfini Hotel welcomes you and promises you,