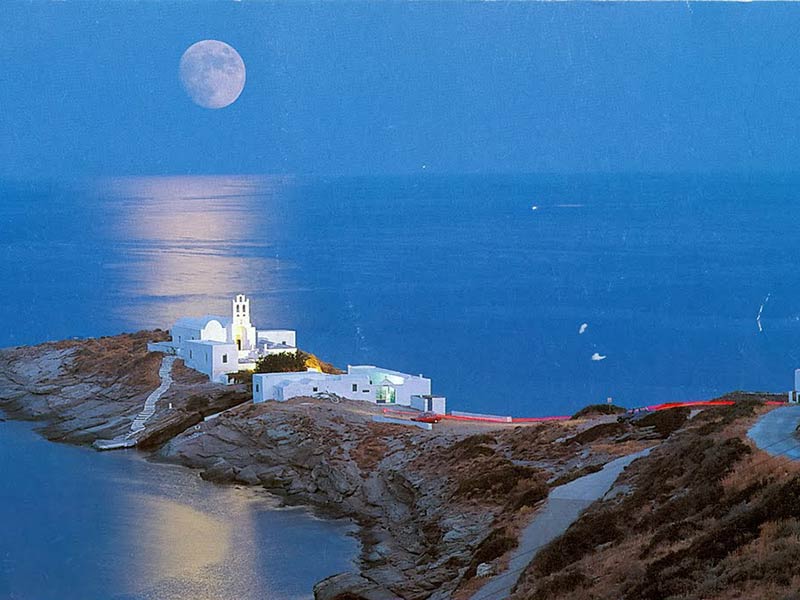 Apollonia is the capital and administrative centre, located in the middle of the island.The name Apollonia derives from the worship of the god Apollo on the island in antiquity. It is also referred to as Stavri, probably after the main crossroads in the area (‘stavrodromos’ being the Greek word for crossroads), which leads north to Artemonas, east to Kato Petali and Kastro, west to Kamares, and south to Platy Gialos, Faros, etc.). Another explanation of the name Stavri is that it comes from the church of the Holy Cross, in the centre of the village.

In Apollonia (which together with the other central settlements of the island has been declared a traditional and therefore protected village settlement) there are banks, a police station, a health clinic, post office, the island’s municipal building, pharmacies, a tourist office, restaurants, rooms to let, apartments and hotels, bars and restaurants.Outside the post office there is a taxi rank, as well as a bus stop for Kamares. At the main junction there are bus stops for all the other villages and beaches of the island. Along the main picturesque path through Apollonia leading to Katavati (known as ‘the Alley’) there are interesting old churches, shops and places to eat or stop for a drink. On summer evenings the place is buzzing with life.

The Folklore Museum of Sifnos, run by the Sifnos Association, is to be found Apollonia’s main square (Plateia Iroon or ‘Heroes Square’). It houses a variety of exhibits showing the daily life and occupations of the people of Sifnos in bygone days, and includes traditional costumes, Sifnian pottery, and historically important publications.

Sifnos | Apollonia : Hotels in the area

At the picturesque village of Platis Gialos, at a peaceful location only 300 meters from the sandy beach, you will find Villa Irini

With an impressive view to the bay of Platys Gialos, "Myrsini" has been built according to the traditional Cycladic architecture and with great respect to the surrounding environment.