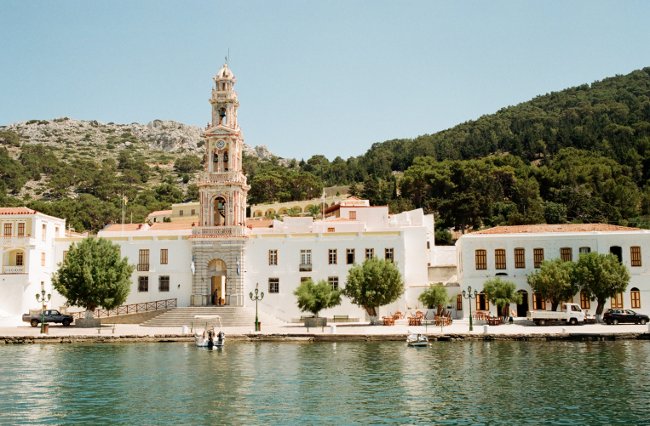 Ιnterior is dotted with small valleys, and its coastline alternates between rocky cliffs and beaches, and isolated coves. Its main town, located on the northeast coast, is also named Symi and consists of the lower town around the harbour, typically referred to as Yialos, and the upper town is called Horio or Ano Symi. Other inhabited localities are Pedi, Nimborio, Marathounda and Panormitis. Panormitis is the location of the island’s famous monastery which is visited by people from all over the world, and many Greeks pay homage to St Michael of Panormitis each year. The island has 2,800 inhabitants, mostly engaged in tourism, fishing, and trade. In the tourist season which lasts from Easter until Panormitis Day in early November, tourists and day-trippers increase the number of people on the island to as much as 6000. In addition to its many historical sites, the island’s isolated beaches, many reachable only with small boats, are popular with tourists. The Municipality of Sými includes the uninhabited offshore islets of Gialesíno, Diavátes, Kouloúndros, Marmarás, Nímos, Sesklío, and Chondrós.

Simi : Hotels in the area

Maravelia's Apartments is located on Symi's seashore, a five minute walk off the main port.

Whenever and wherever you decide to travel, one of the first things to do before packing your suitcases is to make a hotel reservation.

In a beautiful part of town, only 10 metres from the sea, this rustically furnished hotel offers comfortable rooms