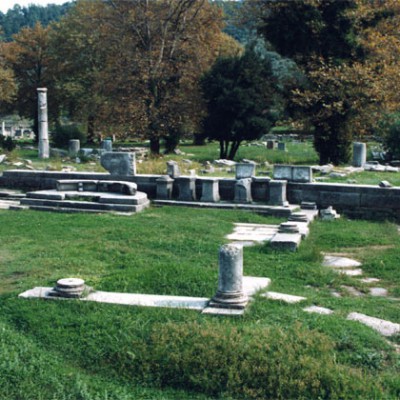 The Archaeological Museum of Thassos (tel. 25930 22180) is located in the homonymous capital of the island and it is situated near the ancient market, almost in the centre of Limenas. It is worth visiting the museum, as it is considered by many one of the most remarkable provincial museums because of the findings that are exhibited dating from the Paleolithic to the Roman era. The exterior area of the Museum is part of your tour, as it is configured in such a way that follows the Archaeological Museum.Kalogeriko is a historical building standing out from all the other buildings at the centre of the ancient port of Limenas. Is was built at the end of the 19th century and nowadays it hosts various cultural exhibitions and galleries of Greek and foreign artists. You should absolutely visit it and admire its architecture.

The Ancient Theater of Thassos is built inside a natural cavity of the hill and leaning against the wall; according to Hippocrates, it must have been built here as early as the 5th century B.C. During the summer, theatrical plays and artistic shows are performed at the ancient theatre. The ascending, especially organized path will lead the visitors to the ancient theater (5th century B.C.) offering a unique view of the sea, which was transformed into an arena during the Roman period. It is worth attending a performance here during the summer. Leaving the theater behind, the path will lead you to the remains of the acropolis and to the temple of Athena, matron-goddess of the town (6th – 5th centuries B.C.).

Thasos : Hotels in the area

Enjoy your relaxing moments in a quiet and peaceful place, just five minutes away from the center of Thassos town.

We welcome you to Apartments Ifigenia!

In the center of cosmopolitan Potos, a few meters from the main crossing, a small yet modern facility has been created for you.

Melathron is located in a quiet location, in the middle of Chrissi Ammoudia-Skala Potamia, just 150m from the beach.

Apartments Nama is a family owned hotel and prides itself on its efficient, friendly service.

The STUDIOS-APARTMENTS IRINI PATIRA are located in the most touristic village of Thassos, Potos.

More hotels in the area