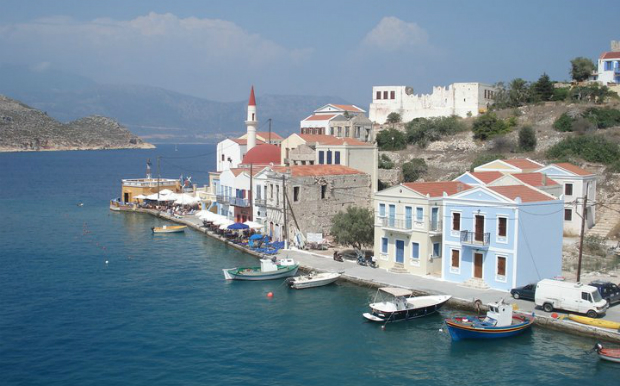 The Castle of Knights of Saint John Tagma. It is dated from the 14th century and it is built in the top of a small hill, right above the port. The rock is reddish (Kastelo Roso) from which the island was named.
Paleokastro is the most ancient monument in the island. In the Castle’s interior are saved architectonic members of ancient structures and tanks, while excavations have brought into light Neolithic tools. In the castle’s yard you will see the churches of Panagia of Kastro, Saint Marina, Saint Paraskevi and Saint Georgios.
The metropolitan church of Saints Constantine and Helen, dated from 1835, is above Mandraki. It is a temple of exceptional art, of basilica rhythm, with rich illustration, marble chancel screen and an impressive marble bell tower. The roof leans against twelve monolithic granite pillars, transferred from the temple of Apollo to Patara, in Minor Asia.
The Archaeological Museum has a remarkable collection of exhibits dated from ancient times, Byzantine and latest years. It also hosts exhibits of folkloric art showing the island’s cultural inheritance and traditions.
“Galazio Cave” or else “Cave of Parastas” is located in the southeast part of the island. It is one of the most beautiful marine caves in Mediterranean Sea and one of the most rare geological phenomenons. It is also known as Fokiali from the monk seals that live in it. Its interior is decorated with beautiful stalactites and stalagmites.